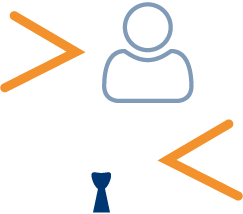 Discover where we are:

Orienta is one of the main Italian Employment Agencies active since 1993, which operates in the human resources sector, in particular in temporary administration, staff leasing (permanent administration), search and selection of personnel, training (Orienta Academy), professional outplacement and outsourcing of business activities through Orienta Direct.

In Italy, Orienta is present throughout most of the country with over 55 operative branches, a turnover of over 170 million euros and around 20 thousand people employed. Orienta offers services to all productive sectors, with some divisions specialising in ICT, Healthcare (Healthcare & Wellness), Fashion (Fashion & Luxury), Transport (Truck & Logistics), Sales (Sales & Marketing) and Services (Office & Contact Center).

It is also present in Poland and throughout Europe thanks to the Eurotemps network, a partnership created with other foreign employment agencies, which aims to offer HR services through an international network. Orienta is currently one of the very few operators in the sector with ISO 9001:2000 and SA8000 certification; in addition, in 2017 it obtained the prestigious ELITE certification from Borsa Italiana.

Giuseppe Biazzo is the founder and Chief Executive Officer of ORIENTA S.p.A., the Italian Employment Agency. Graduated in economics with an MBA at IPSOA in Milan, he was born in Turin on June 4, 1965, married with two children. Since October 2020, he has been vice-president of Unindustria, the Union of Industrialists and Enterprises of Lazio, with responsibility for the Development of Human Capital and Corporate Culture. In addition, since October 2013 he has been president of Ebitemp, the bilateral institution dealing with welfare in the staff leasing sector. From 2011 to 2012, he was vice-president of Assolavoro, the main Italian association of employment agencies belonging to Confindustria. He participated in the negotiation of the national collective labour agreement for the staff leasing sector in 2002 and is one of the signatories. He founded ORIENTA S.p.A. in 1999, of which he is the majority shareholder, and since 1993 he has been founder and chairman of the consulting and outsourcing company Orienta Direct, 100% owned by Orienta SpA. He began his career in 1993 as a commercial officer for the Accor group, the inventor of the Ticket Restaurant, in the Rome office. From 1989 to 1991, he served as an officer in the 1st Carabinieri Parachute Battalion "Tuscania" in Livorno.