Find a job in Orienta 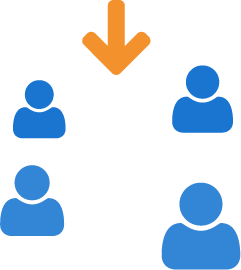 Orienta Spa operates in the temporary work field thanks to important partnerships aimed at improving job conditions all over the Country and giving workers more protection.

In fact, Orienta partners with bilateral authorities that have the same dispositions: they are made up of the same numbers of workers and employers representatives in order to protect people involved.

Ebitemp is the bilateral authority for temporary work born from the match of trade unions and enterprise associations.

Bilateralism, as a tool to ensure modern models of protection to temporary workers, is designed to mitigate the hardship of sporadic employment. It was founded in 1998, with the signing of the first collective agreement in this field, through a contractual agreement between the trade unions Felsa CISL, CGIL and Nidil UilTemp and Assolavoro.

In July 2008 the renewal contract was signed which includes the creation of a small welfare sector, which aims to provide greater security in a system marked by sporadic employment.

Moreover a supplementary fund for supply employees was founded.

Ebitemp provides supply workers with a series of additional benefits.

Formatemp is the fund for Active and Passive Policies aimed at candidates for: business trips and short-term and long-term employment.

The fund was established in 2000, in accordance with Law no. 196/1997 (called Law Treu), which wanted the introduction of the temporary labour supply in our system.

According to Art. 16 of Legislative Decree no. 276 of 2003, the obligatory contribution of employment agencies, which is around 4% of the gross pay of temporary workers, finances the fund, which was authorized by decree of the Ministry of Labour that exercises its power of supervision and control.

Formatemp aims to promote the professional development of individual employees through training courses.

All learning courses funded by Formatemp are free of charge and do not include any kind of fees to be paid by the participants.

The National Collective Work Contract defines, in a unitary way and for the entire national territory, all work relations between the Employment Agencies and the temporary workers, employed with short-term and permanent contracts as per law D.L. n. 276 of September 10, 2003 and following updates.

On February 27, 2014, the new Collective Bargaining Agreement for the category of labour supply employment agencies between the Association of Staffing Agencies - Assolavoro - and the labour unions CGIL - CISL - UIL - Felsa - Nidil CGIL and UILTEMP was signed, with effect from 1 January 2014.

You can read the pdf version of the contract here